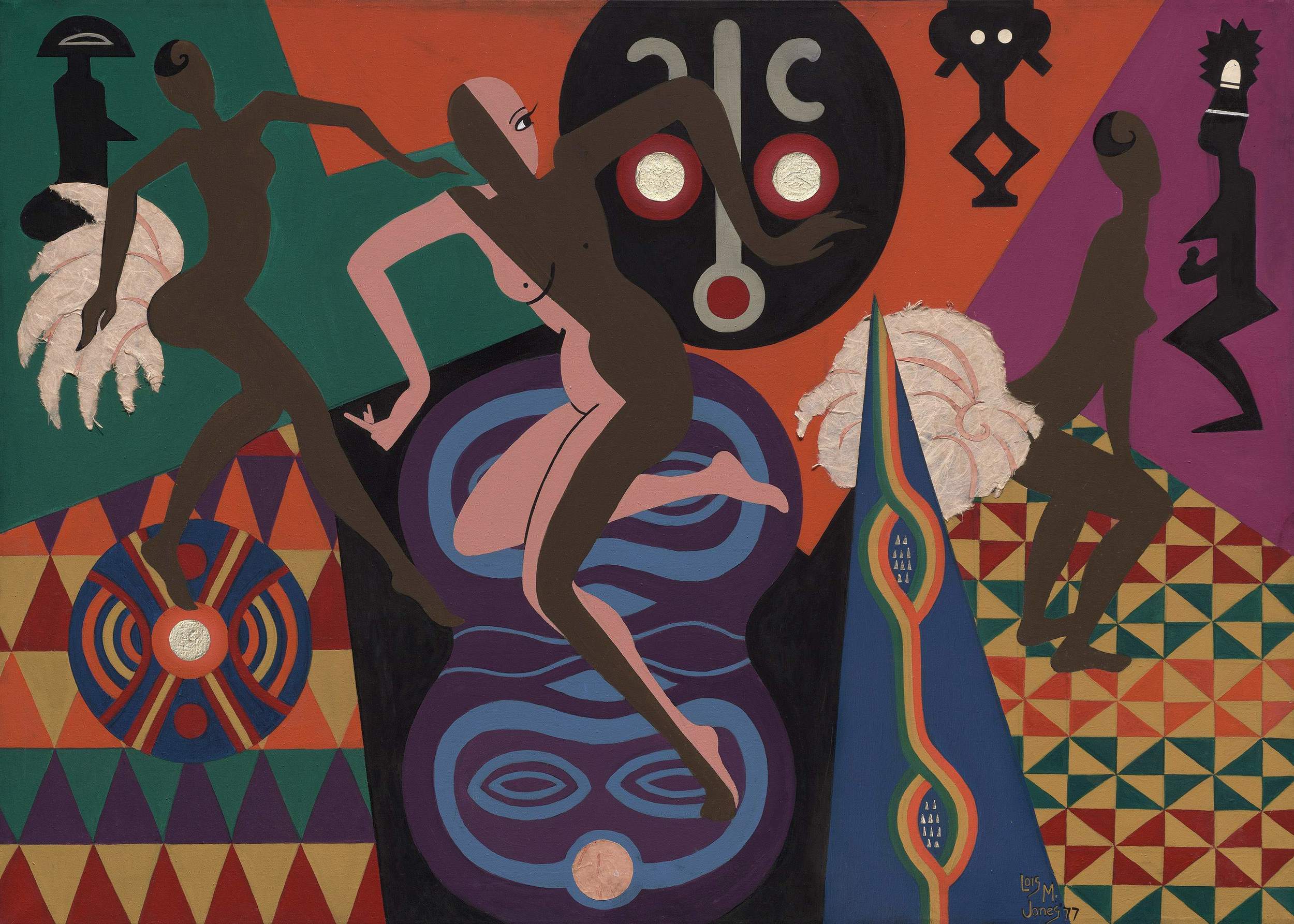 A Life in Vibrant Color

Loïs Mailou Jones: A Life in Vibrant Color is a lively exhibition surveying the wide array of subjects and styles explored by the artist throughout her lifetime. The myriad of themes explored by Loïs Mailou Jones (1905-1998) over the impressive length of her career makes for a dynamic exhibition of more than 70 works, including paintings, drawings and textile designs. The retrospective begins with her early textile designs and sketches from the Harlem Renaissance. After graduating from the School of the Museum of Fine Arts, Boston, at a time when racial and gender prejudices pervaded society, Jones began her career as a textile designer. She sold her bold fabric creations to department stores until a decorator told her that a colored girl wasn’t capable of producing such beautiful designs. This incident prompted Jones to shift her artistic focus to the fine arts so she could sign her name to her works.

During a brief teaching stint at Palmer Memorial Institute, a preparatory school in Sedalia, North Carolina, Jones created several paintings that marked her transition from design to fine art. Though far less vivid than the later works for which she became famous, her early paintings still clearly show her fascination with color and culture.

Jones’ influences were extensive throughout the remainder of her career. Her lush oil paintings of the French countryside and traditional fruit and flower still lifes highlight her skillful observation of nature. The influence of philosopher Alain Locke, who encouraged Jones to draw inspiration from African art, is evident in many of her later works. She also conveyed the social struggles of African-Americans through powerful psychological portraits. Her marriage in 1952 to noted Haitian graphic artist Louis Vergniaud Pierre-Noël instigated a change in the subject matter and palette of her paintings. Her frequent trips to Haiti re-energized her strong design sense and inspired vivid acrylic and watercolor paintings that displayed a marked fascination with Caribbean culture.

After additional travels that included African countries, her work became characterized by brilliant color, rich patterns and a variety of Haitian and African motifs. In addition to her outstanding accomplishments as an artist, Jones was also a noted educator at Howard University in Washington, D.C. for 47 years.

Jones continued to create her vibrant paintings until her death in 1998. A 144-page exhibition catalogue showcasing the life and work of Loïs Mailou Jones accompanies the exhibition. Published by the Mint Museum of Art, the catalogue includes essays by Dr. Edmund Barry Gaither, director of the National Center of Afro-American Artists, Boston; Dr. Lowery Stokes Sims, curator of the Museum of Art and Design, NYC; Dr. Cheryl Finley, associate professor of Art History, Cornell University, and an interview with artist and student of Loïs Mailou Jones, Tritobia Hayes Benjamin.

Loïs Mailou Jones: A Life in Vibrant Color is organized by the Mint Museum of Art, Charlotte, NC, in collaboration with the Loïs Mailou Jones Pierre-Noël Trust, and toured by International Arts & Artists, Washington, DC. The exhibition is funded in part by the National Endowment for the Arts.

Help us Propel Past COVID

At no time has supporting the Hunter Museum been more crucial than it is today as we cope with the significant impact of COVID-19.

The Hunter has launched a Propel Past COVID campaign to raise funds needed to ensure the museum’s stability and resilience through this uncertain time.

Donate now to support everything you love about the Hunter Museum.