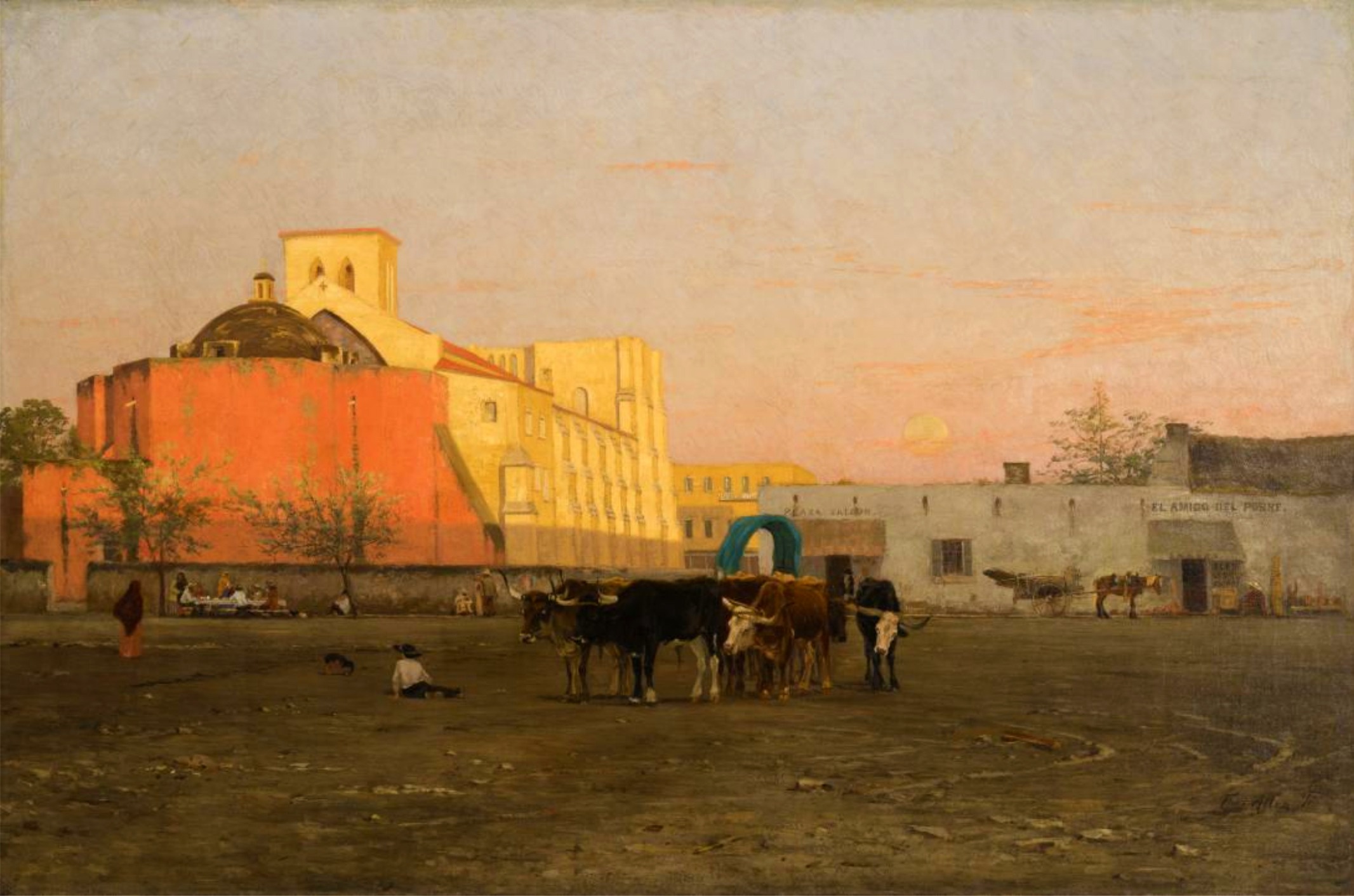 The painting Evening Market by artist Thomas Allen has been a part of the Hunter’s collection since 1993, but wasn’t put on view until recently. This was primarily due to damage, dirt, and cracking paint that had occurred over decades of wear. In 2017, the Hunter sent the artwork to conservator Barry Bauman who removed layers of dirt and discolored varnish, repaired areas of cracking paint, and restored the work, allowing it to be finally put on view in the Hunter mansion. Read on to learn more about the context of the painting, and for an interview with Barry Bauman about the conservation process.

In the 19th century, Manifest Destiny was a widely held belief in the United States that its settlers were ordained to expand across North America. Artistic representations of westward expansion heavily reflected optimism, religious destiny, and endless opportunity for the growing nation. This belief, which justified the movement west of white settlers and the forced removal of indigenous populations from their land, under the guise of spreading “morality” to the “uncivilized” reaches of North America was a common theme for many American paintings of the 19th century. This painting by Thomas Allen, Jr. illustrates Market Plaza in San Antonio, Texas prior to the Gothic-style expansion of the San Fernando Cathedral in 1868. As the viewer looks towards the setting sun, notice how the light seems to only wash over the Cathedral, suggesting that God himself is blessing the church, illustrating the manifest destiny doctrine.

CONVERSATION WITH A CONSERVATOR

After a storied career at the Art Institute of Chicago and at the helm of the Chicago Conservation Center (a private conservation business that grew to be the largest of its kind in the nation), conservator Barry Bauman “retired” to launch a labor of love: a laboratory dedicated to offering complimentary conservation services to museums and other non-profit organizations. The Hunter Museum recently secured Mr. Bauman to conserve Evening Market by Thomas Allen, a 19th century work in our permanent collection. (See this page for images comparing the before and after of this conservation.) Art View editors spoke with him shortly afterwards to learn more about Bauman’s fascinating career in conservation.

You’ve characterized conservation as “an invisible sport.” Could you elaborate?

When you go to a museum and look at the paintings, no one knows who did the conservation work. It’s the artist that’s important and that’s the way it should be. Conservators live in a “behind-the-scenes” invisible world.

What tools do you use most often in your work?

The most important tool is my binocular microscope. It allows me to see surface problems not visible under normal viewing. Other tools include solvents and cleaning materials along with a vacuum hot-table for structural repairs.

“Before” and “after” photographs of your conservation work are dramatic. How do you choose which area of a work to focus on first?

In older paintings, the white that was used was normally lead white. The lead is quite impervious to solvent action. My initial cleaning tests always target white areas first, followed by half-tones and then darks.

What was the most difficult part of conserving Evening Market by Thomas Allen? How did you go about it?

The Allen was coated with a thick layer of dirt and grime that was in direct contact with the paint surface. Removing this film was a delicate process and could only have been carried out under binocular magnification.

Is part of the expertise of a conservator having a vision of how the work should look when you’ve completed the conservation, or is it more about being open to what you discover as you go along?

For myself, I always have a sense of what the painting should look like after conservation repairs, what the spatial effects should be. It’s towards this end that the work proceeds.

Have you ever encountered an artwork so badly damaged or deteriorated it could not be conserved?

I normally turn down treatments when there is over 33% missing paint. At some point, the treatment work becomes more a part of the present than the past and I use 33% as a determining factor.

You’ve conserved thousands of important art works during your career and have even written case studies about some of them. Is there one story or discovery that stands above the rest?

Two case studies on my website stand out for me—one was discovering what something was, the other was discovering what something wasn’t. The first involved the treatment of a painting thought to be a copy of a work by Sir Joshua Reynolds. After treatment, and using X-rays analysis, I was able to prove that the painting was indeed an original work by Reynolds.

In 2010, I was asked to conserve a portrait of Mary Lincoln for the Abraham Lincoln Presidential Library and Museum. Through my work and research I was able to determine the painting was a forgery. My case study, “The Demise of Mary Lincoln” was featured on the front page of the New York Times in an article titled “Mary Lincoln I Presume.”

For more information about Barry Bauman and his case studies, visit www.baumanconservation.com.

Detail of artwork before conservation