COLLAGE FROM THE HUNTER COLLECTION

The current special exhibition Under Construction: Collage from The Mint Museum showcases a wide array of artworks incorporating collage techniques. There are collage works in the Hunter’s permanent collection as well. The role of collage in cubism as presented in Under Construction can be clearly seen in George L.K. Morris’s cubist painting. Light fractures into geometric shapes revealing Catholic and indigenous symbols found within the Tucson church that inspired this work. Robert Rauschenberg creates ‘combines’, versions of assemblages which combines paint and printmaking with found images and found objects. He uses real objects (like the oar and the wings) in his work, adding photos, cloth and newspaper articles. Rauschenberg never has a precise plan for placing these elements, allowing his subconscious to dictate their arrangement. Known for her monochromatic wooden sculptures, Louise Nevelson blended assemblage with abstraction, bridging two traditions explored in Under Construction. Painting the objects elevated the unrelated scraps into a cohesive whole that emphasizes form, shape, and rhythm.

You can try building an assemblage in the East Wing Art Lounge with a hands-on activities inspired by Rauschenberg and Nevelson’s work. Photographer Jeffrey Wolin blends photography and text to offer insight into life histories. Rather than a more literal collage of photographs, Wolin instead writes the stories of his subjects onto the background of his portraits of Holocaust survivors. In this work, the juxtaposition of an image of Holocaust survivor Jakob Schwartz is paired with Schwartz’s story of being transported from one concentration camp to another, offering a fuller view of how this childhood trauma has affected his entire life. Bringing collage into the third dimension, Whitfield Lovell places objects of everyday life in mason jars on a shelf. The woman pictured, a sketch inspired by a photograph found in a flea market, is paired with the items on the shelf below to construct a story of personal and collective memories of African Americans. The final jar on the shelf is empty, inspiring the title of the piece and offering a space for viewers to metaphorically continue to add to the assemblage.

CLICK TO EXPLORE COLLAGES FROM THE PERMANENT COLLECTION STORAGE

The museum galleries display only a portion of the Hunter’s permanent collection. Fortunately, you can explore more collage pieces from the Hunter Museum’s storage by reading below. 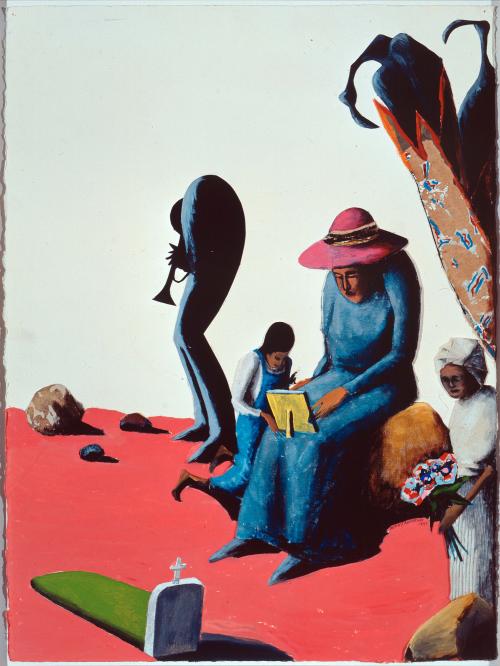 Memories (from the Music Series)

Georgia native Benny Andrews shared personal and familial memories through his collages.  Andrews, who notably illustrated album covers for Duke Ellington early in his career, often incorporated music and faith into his narrative images. In this case, the Blues trumpet offers a visual soundtrack to the memorial acts played out by the other three figures. The figures and rocks are painted separately and collaged onto the background, contributing a variety of textures to this multi-layered piece. 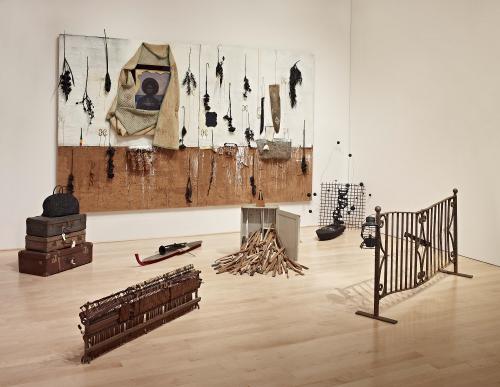 Atlanta-based artist Radcliffe Bailey consistently explores themes of journey and passage through his work in Under Construction, as well as through his piece in the Hunter collection. In the Returnal is inspired by Bailey’s motherland trip to Ghana to explore his heritage, as well as by Bailey’s interest in Marcus Garvey’s early 20th century “Back to Africa” movement. The artist brings his ideas together through a remarkable assemblage of dissimilar objects that come together like puzzle pieces creating a larger themes. 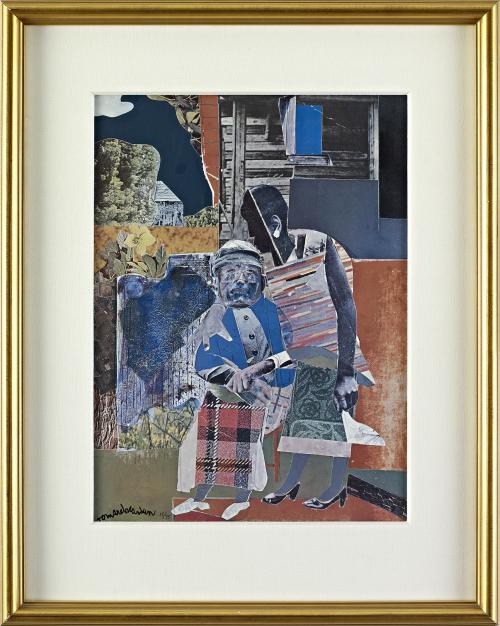 Reunion (from the series Ritual Bayou)

Under Construction offers an extensive look into the work of artist Romare Bearden. The Hunter has several Bearden works including Reunion, which embraces a traditional collage technique to convey the narrative of the Great Migration. While many artists focus on those who have moved to northern cities, this image offers a quiet reflection on a return to a Southern home and a meditative reunion with those who remained in the South. Abstract artist Sam Gilliam, whose work can also be seen in Under Construction, may be best known for his large, draped, abstract canvases. Smaller collages, like this piece from the Snow Lane series, continue his improvisational process, using various printmaking, embossing, and layering techniques with quilt-like patterning to create this sculpture-painting hybrid. 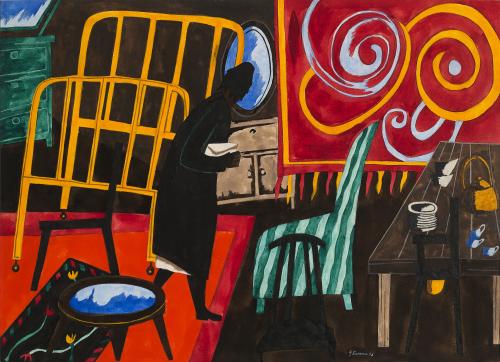 The Apartment, though collage-like, was actually  made using gouache paint and offers an intimate glimpse into an African American woman’s color-filled apartment.

The photographic alternative realities seen in Under Construction are also found in the archival pigment prints of the artist team Nicholas Kahn and Richard Selesnick. Khan and Selesnick create complex, layered narratives that examine the intersection of truth and fiction. These manipulated photographs add a comic veneer to deeper cultural critiques, in this case as commentary on capitalism and climate change. Bringing in a pop art collage aesthetic, Japanese American artist Roger Simomura blends popular culture figures from both American and Japanese culture. This lighthearted look at comic figures and super heroes also reflects his deeper exploration of issues of race and bigotry in American society, something he experienced first-hand when his family was placed in the Minidoka Relocation Camp during WWII and that he continues to experience as an ethnic minority in his current home in Kansas.

BACK
HUNTERMUSEUM.ORG
BECOME A MEMBER

Apply today’s admission towards an annual membership and enjoy local discounts, member-only events, and access to over one hundred regional institutions for free.